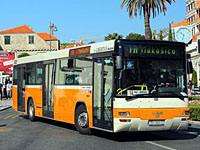 Getting around Dubrovnik by bus is the recommended method of transportation, especially during summer. Yes, its hot, som popular bus lines fill up the bus already at the first few stations, but considering all it is still better and cheaper than getting around by car.

All the areas of Dubrovnik are conveniently linked by buses that run according to the timetable, anywhere from every 10 minutes to every half hour. (map of Dubrovnik's bus network is available bellow). Many buses begin running at about 5.00 in the morning and pick up their last passengers after midnight.

The fare is 15 Kuna if you buy from the driver upon entering the bus, but a good tip is to buy them before from a kiosk ot other selling office because pre purchased tickets are cheaper (12 Kuna). You can also buy a Daily Ticket for the price of 30,00 Kuna. Tickets are usually also available at some travel agencies, from reception desks of most hotels, at the main bus station and at the ticket office at Pile Gate (entrance to Old Town Dubrovnik).

Upon boarding the bus you need to validate the ticket by inserting it into a validating machine, most bus drivers will assist you in case of validation problems.

Did you know that you can get a free bus ticket, visit museums and other top attractions in Dubrovnik, including the City Walls, and save up to 50%, by getting a Dubrovnik Card

More detailed information about timetables. The company in Dubrovnik that manages the city routes is Libertas Dubrovnik.

Timetable for all city buses in Dubrovnik

Posted in Travelling by bus