The most beautiful jewel of Croatian cultural heritage 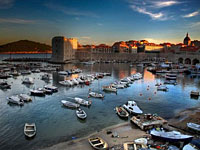 The most beautiful jewel of Croatian cultural heritage, the Old City of Dubrovnik, is situated in the extreme south of the sunniest tourist region of Dalmatia – the Dubrovnik Region. The region is made up of the Dubrovnik-Neretva County, which stretches across the coastline. This is where Dubrovnik is the most important, but by no means the only cultural pearl. There is the home of Marco Polo, on the island of Korčula, the green islands of Mljet, Lastovo and Elafiti and their picturesque villages, the Pelješac peninsula with its vineyards and captain's homes, the magic valley of Konavle, and the fertile delta of the Neretva river.

The Dubrovnik area also had a special historical development from the 13th to the 18th century, when Croatian culture and art particularly flourished. It peaked in the 16th century, during which time the famous Dubrovnik Republic was most powerful.

The view of the OLD TOWN OF DUBROVNIK, when seen from high above the sea, from the direction of Dubrovnik airport, is one of the most famous views of Croatia on the Mediterranean. After all, the first sentence in the description of Dubrovnik on the UNESCO List of World Heritage starts with the words "The pearl of the Adriatic on the Dalmatian coast'', because not many cities boast such a beautiful location on the cliffs above the sea, with such well preserved medieval stone walls and towers. The towers and walls were built with good reason. Dubrovnik, being so beautiful and wealthy was under threat from many conquerors, as it was under threat in the recent war in the last decade of the 20th century. Next to the cannons on the walls of Dubrovnik today we will not find soldiers, but peaceful tourists and participants of theatrical performances and folklore events. Instead of cannons and rifles, today well-intentioned tourists admire this unique panorama, trying to permanently capture its beauty with their cameras.

The main vein of Dubrovnik is the street Stradun, on whose western end we can find the large fountain of Onofrio, and at the eastern end in the square of Luža is the column of Orlando, a symbol of the freedom of Dubrovnik. Luža Square is a favourite gathering place for tourists and one of the main areas for hosting various events, including the major cultural event, the annual Dubrovnik Summer Festival. Arranged around the Luža Square are the most important secular buildings of medieval Dubrovnik - a Gothic-Renaissance Rector's Palace, the centre of the Dubrovnik authorities and the palace Sponza. Both were built in the 15th century, like most of the major buildings in the Old Town. The Rector's Palace boasts an interesting atrium, a popular stage for theatrical performances. In its interiors, converted into a museum, there is a lot of old furniture, paintings and sculptures, and even the carriages of Dubrovnik nobility. The Sponza Palace, a former customs house and today The Archive of Dubrovnik, also boasts an interesting atrium. Along the Luža Square stand the main religious buildings of the Old Town – the Church of St. Vlaho, the patron of Dubrovnik, and the Cathedral of the Assumption. Both are decorated in Baroque splendour since they were built in the late 17th century, after the disastrous earthquake in 1667. The interior of the Cathedral boasts a magnificent organ and a number of valuable exhibits of which the most important is the reliquary head of St. Vlaho. The town core of Dubrovnik has a few monasteries with rich interiors. The interior of the church within the Jesuit Monastery is decorated with painted walls, while the Franciscan Monastery has a collection of old pharmaceutical equipment, and the Dominican Convent has a rich collection of paintings and a nicely decorated garden. Among the religious buildings of other religions is a synagogue from the 15th century, the second oldest in Europe by virtue of its continued use. Dubrovnik is well known for its museums, which are annualy visited by close to half a million visitors. After the Rector's Palace, the second most visited is the Maritime Museum, where you can learn about the maritime history of Dubrovnik from the Middle Ages to the 20th century.

The surrounding area of Dubrovnik doesn’t have many monumental buildings, but is characterised by the harmony of architecture embedded in the green environment. This is especially evident in the southernmost corner of Croatia, in the fertile valley of KONAVLE. Konavle comes to the fore with its preservation of beautiful folk costumes and the preserved building heritage, such as Konavoski Dvori at the source of the river Ljuta. The Konavle ethnographic treasures are kept in the Ethnographic Museum in Čilipi. The southernmost part of Konavle and the Croatian mainland on the Prevlaka Peninsula is known for its strategic significance; it controls entry into the Bay of Kotor in the neighbouring Montenegro, and is still today prevailed by a monumental fortress.

The main settlement of Konavle is the picturesque village of Cavtat, birthplace of the great Croatian painter Vlaho Bukovac. His birth house was converted into a gallery of his paintings. Another valuable site in Cavtat is the Račić family mausoleum from 1921, the work of the Croatian sculptor Ivan Meštrović.

The west of Dubrovnik offers the Dubrovnik coastline, famous for its noble summer residences surrounded by greenery. On one of these residences, in the picturesque village of Trsteno, is the most beautiful Croatian arboretum, where on a small surface are a variety of subtropical species of plants, flowers and trees. The whole arboretum Trsteno is arranged as a landscape park decorated with sculptures, of which the most famous is the statue of the Greek god Poseidon, in front of the picturesque fountain. The arboretum boasts nicely decorated rest areas from which you can enjoy the view of the open sea.

Further down to the west stretches the naturally most special part of the Dubrovnik region, THE NERETVA RIVER DELTA, with preserved wetland landscapes and picturesque places along the river, among which the town of Opuzen stands out with its exeptional beauty. Near the largest town of the Neretva river delta, Metković, there is a village called Vid at the site of the former ancient Narona. Here, at the original location of the site stands a museum that was built over a part of the Roman Forum, or Augusteum, with a number of carved marble imperial statues.

Starting from the coast of Dubrovnik and moving towards the island of Korčula, we pass through the mountainous winegrowing peninsula of PELJEŠAC. The old centre of the peninsula is the scenic town of Ston, located on the isthmus that connects the peninsula with the mainland. Between Ston and the neighbouring Mali Ston, famous for the cultivation of oyster shells, are impressive walls. At the west end of the Pelješac Island is Orebić, its most famous centre and the village of sea captains. The strong maritime tradition of Orebić can be seen in two maritime collections, one in the Maritime Museum and the other is a collection of the Franciscan Monastery on the hill above Orebić. Here, next to the church and the Franciscan Monastery of Our Lady of the Angels we are offered an unforgettable view of the Pelješac channel, Korčula and the other islands.

The largest island of the Dubrovnik area, KORČULA, again offers the luxury of large buildings, especially in its main town, which bears the same name. Its appearance today is mainly due to the period from the 14 th to the 16 th century, when, unlike the rest of the Dubrovnik area, it belonged to the Republic of Venice. Korčula is easily recognizable by its streets, arranged in the shape of a fishbone, and the preserved Gothic and Renaissance buildings.Among those buildings is the Cathedral of St. Mark with a richly decorated exterior, and an interior which holds the painting of the great Venetian painter Tintoretto. The second most important religious building is the Franciscan Monastery on the island of Badija, situated near the town of Korčula, also with a richly decorated exterior. There is the Town Museum of Korčula, which has exhibits dating from ancient times through to the 20th century. To visitors of Korčula, the most interesting place is the house of the Polo family, because Korčula’s most famous son and world adventurer Marco Polo comes from here. The inhabitants of Korčula carefully preserve their heritage, such as religious events and the medieval knight game called Moreška, which traditionally takes place annually on the streets of the city. Vela Luka and Blato, the two larger towns in the west of the island also have valuable heritage. Along Vela Luka, made famous in a beautiful song, is the most important prehistoric site in Dalmatia, Vela Spila. A number of ceramic, stone and bone objects from the Neolithic period and preserved decorated tombs were found in the cave above the town. The picturesque Blato, in the inland of Korčula, once the largest town of the Adriatic islands, is today known for quality agriculture and preserved ambiental architecture.

The two most distant islands of Dubrovnik, MLJET and LASTOVO are known for their natural heritage - the National Park Mljet and Lastovo Nature Park. They also have interesting cultural monuments, among which the most important is the Benedictine Monastery from the 12th century on an island in the middle of the Great lake in the National Park. Lastovo, the main town which bears the island’s name captures us with its beauty. Located on the amphitheatre - shaped hillside above the fertile fields, it is known for decorative chimneys on the roofs of the houses, preserved traditional costumes and a special carnival. The pearls of architecture and the old lighthouses from the 19th century on the most remote islands in the waters of Lastovo, Sušac and Glavat are something special.

At the end of our journey across Dalmatia and Croatia it would be a sin not to mention the Elafiti islands in front of Dubrovnik, with magical old villas and castles from the period of greatest splendour of the famous Republic of Dubrovnik. Most of them are on the island of Šipan, and the most beautiful is the 16th century Renaissance castle – Skočibuha, which belongs to the Stjepković family.