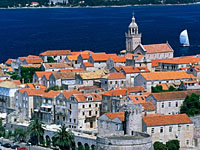 Croatian cultural heritage is not as well known as the cultural heritage of some large and powerful countries. It has no magnificent monuments, such as for example the Egyptian pyramids, the Pompeii in Italy or the castle Neuschwanstein in the German Alps. Croatia was not the centre of the great empires of the past and will surprise many visitors in that, in proportion to its surface, there are more sites of cultural heritage under UNESCO protection in Croatia than for example in France or Germany. Croatia has many other valuable cultural monuments which would also be able to find a place on UNESCO's list.

Proportional to its size, what is particularly significant about Croatia is its wealth of intangible heritage; with as many as nine cultural phenomena inscribed on the Representative List of the Intangible Cultural Heritage of Humanity, Croatia is among the countries with the most protected intangible assets in the world. Inscribed on the UNESCO list are the Festivity of St. Blaise in Dubrovnik, lace-making in Lepoglava and on the islands of Hvar and Pag, the carnival group of bell ringers from the Kastav region, near Rijeka, a unique religious event – the Hvar Procession “Za Križen” (‘following the Cross’), two-part singing and playing of the Istrian scale, the spring procession of the women’s folklore group Ljelja in Slavonia, the production of traditional wooden toys from the Croatian Zagorje region, the Sinjska alka – a knights’ tournament in Sinj and the gingerbread craft from northern Croatia. Ojkanje singing features on the List of Intangible Cultural Heritage in Need of Urgent Safeguarding.

One reason for this wealth of tangible and intangible cultural heritage is the outstanding position of Croatia on important traffic routes and at the crossroads of great civilizations, each wanting to leave their mark. Therefore, Croatia is characterised by exceptional diversity of cultural heritage on a small surface and the presence of monuments from all periods of civilization, from Ancient History to recent times. Thus, in Croatia, we can find monuments from ancient Greece, ancient Rome, early medieval monuments, Mediterranean Renaissance, Middle European Baroque and Modern secessionist heritage. There are also unique testimonies from the earliest prehistoric times, such as the Neanderthal man of Krapina, one of the world's most important sites , the Vučedol Neolithic culture near Vukovar, pre-Roman Illyrian ruins and many more.

In Croatia there are many testimonies of local people using skills that followed modern trends of large neighbouring cultures, but they also created unique autochthonous achievements, such as the medieval churches of Croatian rulers in northern Dalmatia, or the palaces of the Old Town of Dubrovnik. Many Croatian artists and architects entrusted the whole of humanity with their works, in the 15th century, Juraj Dalmatinac applied a previously unseen form of prefabricated building to the Cathedral in Šibenik, while the statues of Ivan Meštrović adorn particularly important locations in Chicago, in the United States.Croatia has managed to preserve the rural and indigenous architecture, which clearly testifies to its cultural diversity. Today we can still see old wooden houses and churches in the flatlands of Pannonia and the unique elongated Slavonian houses with large yards in the Danube region, picturesque huts on hills in the north and shingle covered old houses in the snowy mountains of Croatia. Perhaps even more charming, are the Mediterranean villages with houses made of stone on the mountain peaks in Istria, or by the sea on the Croatian coast and islands.

This diversity makes it clear that large European civilizations had mixed here, and that it is right here that the influences of Europe's largest ethnic groups of Slavs, Romans and Germans had come together. Adding to the luxury of Croatian cultural heritage, is the fact that just by the country’s Eastern borders were the former Western and Eastern borders of Christianity, and Western and Eastern European culture. This is where the last line of defense used to be for the overcoming Islamic civilization in the late Middle Ages, as evidenced by many mighty works, and other monuments of the rich military history. The six most important parts of Croatian cultural heritage are - the Old City of Dubrovnik, a historic complex in Split with Diocletian's Palace, the historic town of Trogir, Euphrasius' basilica in Poreč, the Cathedral of St. James in Šibenik and Starogradsko polje on the island of Hvar, all protected as World Heritage Sites by UNESCO. In addition to these, Croatia has 340 protected historic entities and a whole series of individual historic buildings, churches and chapels, fortresses and castles, manors and palaces and archaeological sites. Croatia, in its many museums, holds priceless and diverse cultural treasures, and there are many festivals and events, from music and film events to folklore events and carnivals. The cultural riches hold something for everyone.