Zadar region is famous for its cultural heritage, historic monuments and surrounding islands 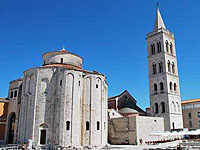 The origin of early Croatian culture Dalmatia is the largest and the most famous historic region of Croatia. It occupies the southern part of Croatia and it is an area of sun, warm sea, olives, wine, fish, poems and picturesque villages with houses made of stone – the real pristine Mediterranean. It is culturally the richest part of Croatia, in which five of the six sites are protected as World Heritage by UNESCO. Since Dalmatia is often reached from the north, we are welcomed by the first of four Dalmatian tourist regions, the Dalmatia - Zadar region, which includes the Zadar County.

Here we find the historical centre of Dalmatia, Zadar, the islands of Pag, Dugi Otok, Ugljan, Pašman, and many smaller islands. Moreover, most of the inhabited islands of the Croatian tourist region can be found in the Zadar area, the region with the strongest developed agriculture on the whole of the Croatian Adriatic coast. All these regions are rich with historical heritage dating back to prehistoric times, and especially the heritage of the antique period and the early Middle Ages.

As it offers the most attractive lifestyle and has an important strategic position in the centre of the Croatian Adriatic, the region has been hit hard in many wars, including the Homeland War. There are many traces here of life dating from prehistoric times and ancient times of the Illyrians and Romans, and it is precisely the area of Zadar that is connected to the development of the first Croatian Kingdom and the largest number of monuments of early Croatian culture. This is where the Croats first came into contact with ancient culture in the 7th century, with traces left in monuments on every corner, and they were one of the first European nations to embrace Christianity.

Although the Venetians ruled the coastal part of the Zadar area in the 15th century, and the hinterland came under the authority of the Turkish Empire, the area of Zadar kept a strong Croatian national spirit throughout that time. This spirit was preserved during the Austrian rule from the 19th century to the end of World War II, and it is precisely in the Zadar area that the national movement focusing on the unification of Dalmatia and Croatia strengthened, which was achieved primarily in the former Kingdom of Yugoslavia, and since 1991 in the independent Croatia.

Today, it is the same strong national spirit which directs the rapid economic development making Zadar and its surroundings economically one of the most dynamic parts of Croatia. Despite the strong development, the natural heritage of the Zadar region has remained well preserved, and numerous monuments still remain harmoniously integrated into the natural landscape and the structure of urban settlements. One of the best testimonies to the ZADAR region's historical importance and value of its historical heritage is the core of the city , the largest on the Croatian Adriatic coast. More highly valvable sacral heritage is connected to the city and its surrounding islands, such as Pašman. The inhabitants of Zadar, the second largest city in Dalmatia, say that the most beautiful sunset in the world is one seen from Zadar's waterfront. This was also stated by the famous British film director Alfred Hitchcock during his visit to Zadar in the 1970s. On this site today is a particularly interesting, fun, very effective and impressive complex of installations; the Sea Organ and Greeting to the Sun.

Among the many churches in Zadar, the 9th century church of St. Donat holds a special place, with its unique circular form, making it an indispensible part and a sort of trademark of Zadar. There is also the Romanesque Basilica of St. Grisogono from the 12th century, the Cathedral of St. Anastasia from the 12th – 13th century and the church of St. Simeon from the 5th – 18th century, whose corpus is kept in the famous chest at the main altar.

Zadar has been the Archdiocesan centre since the 12th century. The Permanent Exhibition of Church Art at the Museum of Ecclesiastical Art, popularly called by the great Croatian writer Miroslav Krleža as "The Gold and Silver of Zadar", exhibits many works of art made from gold and precious stones, especially crosses and valuable religious paintings.
Zadar's historical core is filled with various cultural monuments - walls, towers, churches, palaces, public buildings and majestic gates. Among the towers, the one that stands out in particular is the Captain's Tower, and among the gates, the Land Gate, a masterpiece of the late Renaissance architect Michele Sammichelia. The Museum of Antique Glass is also located in Zadar, and it exhibits a unique set collection. Outside the walls of Zadar there are some modern architectural works, among which are a new sports complex with a basketball court and indoor swimming pool and Greeting to the Sun - an interesting visual installation.

Since Zadar was the centre of Byzantine Dalmatia in the early Middle Ages, the main church centre around the Croatian Kingdom was the city of NIN. Here, on a picturesque island, which can be entered through several old gates, the settlement of the Illyrian Liburna tribe has existed since the 9th century BC. Nin became the headquarters of Croatian bishops, and an extremely valuable and very distinctive medieval church of the Holy Cross was built there in the 11th century, while the interior of the city was decorated with other smaller churches and chapels.

On a hill next to Nin stands another jewel of Croatian medieval art, the Romanesque church of St. Nicholas. The role of the parish church today is held by the church of St. Anselm, a former early Christian and medieval Cathedral with a bell tower from the 12th century. Very valuable exhibits of the former Cathedral are kept in the treasury of the parish church, and have on them inscribed the names of significant donors, such as the princes Šubić. The archaeological collection houses valuable artifacts dating from prehistory to present times, with special emphasis on the Roman and Old Croatian period. The remains of the old Croatian early medieval ships found in the lagoon in Nin are of exceptional value.

In the microregions of Zadar, RAVNI KOTARI and BUKOVICA, we can also find many valuable cultural and historical monuments. Among them is a special place with monuments related to the Knights Templar and Hospitallers in Croatia. Their centre was in the town of Vrana and the famous Vrana priory had a crucial role in the management of the medieval Croatian state until it fell into Turkish hands in the 16th century. Today all that remains of Vrana are the walls, with the village of the same name along the banks of Lake Vrana, and important remains of the Turkish khan (caravanserai), the endowment of Jusuf Mašković, admiral of the Turkish Armada, born in Vrana.

Today the centre of the Ravni County, Benkovac also boasts a mighty fortress and an old church. Benkovac was an important centre even in ancient times, as evidenced by the remains of the nearby ancient Roman city, Asserija. Nearby Benkovac are the old forts Kličevica and Karin, below which there is the Karin Franciscan Monastery, dating from the 15th - 18 century, which lies in the deeply indented bay of the Karin Sea in the Adriatic. The Karin Sea flows through the Strait of Ribnica into the Gulf of Novigrad Sea, named after the picturesque town of Novigrad, positioned under an old medieval fortress. The 16th century Orthodox monastery Krupa, whose church interior was decorated with frescoes in 1602, is situated further inland into the the karst hills of the southeastern desert of the Velebit mountain in the valley of the river Krupa. In the Ravni Kotari and Bukovica districts there are many other smaller, old churches, harmoniously integrated with the surrounding landscape between the slopes of Velebit and the sea coast.

The numerous ZADAR ISLANDS have a valuable historical heritage, and the area of Zadar is exceptionally indented, which makes it especially interesting for sailing. On the island of Pašman, there are two valuable monasteries - a Franciscan monastery from the 14th - 18th century and Benedictine Ćokovac, on the hill above Tkon, from the 12th - 15th century. The latter is the only active Benedictine monastery in Croatia and holds the most notable and valuable collection of old paintings. Next to the island Ugljan on the smaller island of Galevac is a beautiful monastery of the Franciscan Third Order from the 15th century.

On the islands of Zadar there are many old forts and towers, such as the Kaštelina on Vir or Toreta, a viewpoint on Silba, and the cape of Veli rat on Dugi Otok (Long Island) has one of the most beautiful Croatian lighthouses. However, the most valuable cultural heritage of the Zadar islands is found on Pag, the island of salt, cheese and lace. It is connected to the mainland by a bridge and is surrounded with well preserved fortified towers. Today's city centre originates from the 15th century Pag, organised as an orthogonal grid of streets and squares, an idea probably originating from the famous Croatian sculptor and architect, Juraj Dalmatinac. At its heart is the church of the Assumption of the Blessed Virgin Mary from the same period.