The guardian of Mediterranean architecture that marked the world 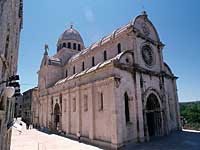 Starting from Zadar and moving towards the south, we come to the Dalmatia - Šibenik Region, known for its national parks Krka and Kornati. This region, which constitutes the Šibenik-Knin County, also has very valuable cultural heritage. After all, the county itself was named after its two most important historical cities - the capital, and today the more important Šibenik along the Adriatic coast, and the second, but more important in the past, the royal town of Knin in the interior of the Dalmatian hinterland.

The Šibenik part of Dalmatia and the neighbouring Zadar area consist of three parts - the coastal area, in which the central part is the city of Šibenik, the islands of Murter, Prvić, Kaprije, Žirje, Zlarin and Krapanj, and the vast Dalmatian hinterland around the towns of Drniš and Knin. Although in the Šibenik area there are no large islands, the Kornati archipelago consists of the largest number of islands in all the Adriatic region.

Like other parts of Dalmatia, the Šibenik area also has numerous cultural monuments dating from prehistoric to present times. Here we have a particular abundance of archaeological monuments from the Illyrian, Roman and early medieval period, with the most valuable monuments being from the 15th and16th centuries. This area is an important part of Croatian history. It was the centre of the early medieval Croatian kingdom, where Croatian princes and kings ruled from the 9th century until the unification with Hungary in the 12th century. Thus, unlike most Dalmatian cities which were erected on the foundations of ancient cities, Šibenik was the first original major Croatian coastal city. It was founded in the 11th century at the time of King Petar Krešimir IV and many still call it Krešimir's city. At the time of King Zvonimir the capital city of Croatia was Knin, which we call Zvonimir's city even today.

The best known and most valuable cultural monument of the Šibenik part of Croatia is the Šibenik Cathedral, protected as a World Heritage Site by UNESCO. There is also the picturesque town of Primošten with its vineyards, and a number of ancient archaeological sites, particularly on Bribirska Glavica in the vicinity of Knin. Among religious buildings, the Franciscan monastery on the island of Visovac is of exceptional beauty. It has a unique position on a small island in the middle of the lake near the expansion of the river Krka. Not far away is the Orthodox Monastery of St. Archangel in the canyon of the river Krka, which is, with the already mentioned Krupa Monastery, considered to be the most valuable monument of the Serbian Orthodox Church in Croatia. A sort of trademark of this part of Dalmatia are a number of fortresses, a testimony to the tumultuous past. In Šibenik there are three monumental forts that stand out, Saint John, Saint Anne and Šubićevac, and the only entry into Šibenik from the sea, is through the narrow passage of Saint Anthony, where the monumental 16th century fortress of St. Nicholas is located. An interesting newly constructed church in the village of Kijev, located at the foot of the Croatian Dinara Mountains, is a testimony to the suffering endured in recent wars.

The Šibenik area is known for its many picturesque places, such as Skradin, along the river Krka or Prvić Šepurine on the island of Prvić. There are also picturesque villages in Dalmatian Zagora, from which the most famous Croatian sculptor Ivan Meštrović originates. For his last place of rest he chose his native village Otavice, where he built a unique mausoleum.
The most important cultural monument of the Šibenik part of Dalmatia is the CATHEDRAL OF ST. JACOB in the town of Šibenik. This magnificent structure was built over more than 100 years, from 1431 until 1535, and its features and appearance are the works of the greatest Croatian sculptor and architect, Juraj Dalmatinac, while the dome was completed by Nikola Firentinac. The main reason for which it is on the UNESCO World Heritage List is the unique blend of Gothic and Renaissance style of building and the special way of construction with large stone blocks. This especially comes to our attention in the dome of the cathedral. The interior is even more luxurious than its exterior.

The outside of the building boasts a frieze decorated with 71 stone heads of men, women and children, while the inside of the church is richly decorated with sculptures and an expansive portal. The cathedral is harmoniously blended into the town's centre, with steep narrow streets at the foot of the slopes of Šubićevac hill, which also holds other valuable cultural monuments. Particularly emphasised are the numerous churches, such as the church of Santa Barbara, Saint John and the Orthodox Church of the Assumption of the Virgin Mary on the site of a former Catholic church. Among the secular buildings of Šibenik, the one which stands out the most is the Renaissance building of the City Hall from the 16th century. THE COAST AND ISLANDS of the Šibenik part of Dalmatia do not hold as many valuable monumental buildings as the city of Šibenik, but attract attention with their picturesque scenery and the preserved national heritage. This is particularly applicable to Primošten, located on a hilly peninsula and connected to the mainland by a narrow isthmus. Along it stretch the famous vineyards, an example of diligent manual work on the grudging stone.

The Croatian Garden, in which the Primošten vineyards have a leading role, won the gold medal at the world exhibition "Japan, Flora 2000", which shows of what great value they are. After the exhibition, the process of listing the Primošten vineyards on the UNESCO World Heritage List started, and today their images adorn the interior of the UNESCO building in Paris. Old customs are also preserved in the villages around Primošten, like on the Jurlinini Dvori estate, where you can witness how people once lived and worked. A number of the island villages are characterised by their originality and preservation of traditions, such as Betina on the island of Murter, known for its tradition of building wooden ships. There is also the fishing centre Murter, whose inhabitants have always been the owners of land on the Kornati Islands, and the smallest inhabited island of Krapanj, known for its tradition of sponge making. On the island is a Franciscan monastery with a typical regional museum.

A very special sight of Šibenik is the Church of St. Savior from the 9th century, under the highest Croatian mountain Dinara. It is known as the oldest Croatian church, and has a preserved bell tower. Below Dinara, in the town of Knin, is probably the largest Renaissance castle from the 16th century. Next to it is a small museum with exhibits from the ancient past, but also from the recent past of the Homeland War. There are many forts around Drniš, next to the river Krka, such as Nečven grad or the fortress above the town of Drniš. Since the famous Croatian sculptor Ivan Meštrović is from Drniš, the Drniš Museum has a rich collection of his works. In addition to the statues exhibited there, is one of the few of his paintings – an image of a mother.