An area with a rich warrior past 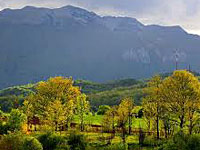 The region of Lika – Karlovac is the largest of all the regions that lead out to the Adriatic Sea, and it is the biggest and the most sparsely populated part of Croatia. In addition to crude nature, the sparse population of this area has been influenced by its turbulent history, and frequent exposure to a number of wartime devastations, especially in times of battle between the Christian Europe and the Ottoman Empire. Consequently, we can find relatively few historical monuments here, and those which survived are in large part related to the rich military history.

This region consists of two Croatian counties - Lika- Senj and Karlovac. The Lika-Senj County encompasses the most historical province of Lika in the mountainous area, the rugged and wild coastline leaning on Lika, and the northern part of the island of Pag. The Karlovac County also covers a part of the Croatian mountains, but in most part it comprises the historical province of Kordun and Pokuplje in Pannonian Croatia. The warrior tradition in this region is supported by the fact that its largest city, Karlovac, was founded as a military fortress, and the name of the historical province Kordun comes from the French name for the area, cordon militaire (Military Frontier).

From these regions, in spite of their low population density, come many famous people in history. The most famous among them is one of the world's greatest inventors, Nikola Tesla, and for Croatian history, of particular importance are politician Ante Starčević, known as the "father of the fatherland", the noble warrior Fran Krsto Frankopan, and one of the greatest writers, Ivana Brlić Mažuranić.

In the coastal part of the Lika – Karlovac region the only major town in SENJ, a city at the foot of the slopes of the largest Croatian mountain, Velebit. In Senj there stands one of the most monumental forts of the Croatian coast, the tower Nehaj. It was built in the 16th century and housed the famous Senj Uskoks, who defended the Croatian coast from attacks by the Turks. The tower is now a museum which holds a rich collection of weapons and national costumes.

Of the military importance of Senj testifies the tower in the port and the scenic lighthouse in the form of a circular fort , while its maritime significance can be inferred from models of ships in Senj's museums, and even in the church of st. Mary of Arta. Senj is an important port as, of all the coastal towns, it is the closest to the Croatian inland. The Jozefina road, built in the 18th century, connected the port with Karlovac, and today has a monument dedicated to it . Senj, despite its small size, is a bishop's city, as evidenced by the Cathedral of St. Mary from the 12th century.

The only major island that belongs to the Lika – Karlovac region is the island of PAG, which can be reached from the ferry port Prizna near Senj. Specifically, only the northern part of the island of Pag, which used to be a part of the town of Rab, belongs to the region, and the southern part, that once belonged to the city of Zadar, today is within the Zadar County. The only larger settlement of this part of the island is the town of Novalja, known for its beautiful beach Zrće, which offers a fantastic nightlife. The Novalja area has been inhabited since Roman times, as evidenced by the remains of the Roman aqueduct and a number of amphora underwater sites. Its naval and ethnological heritage can be experienced by a visit to the local museum. Around Novalja are a number of small settlements, among which stands out Caska (ancient Cissa), exhibiting the archaeological remains of the once powerful city of the Roman Empire, known for the so-called 'Tunera' observation tower , and Lun in the extreme north of the island, known for its interesting old churches and olive trees over two thousand years old.

Starting from Senj, going over the Velebit mountain into the inland of LIKA, we come to the picturesque rural landscapes of Lika, nested in the green forests and clear lakes, like the Lake Kruščica. Thanks to the abundance of forests, but also because of the harsh climate, the houses here were built mostly from wood. The best preserved are in the Gacka valley, where the clear waters of the river Gacka are the fisherman’s favourite, and where we can sometimes come across mills from the old times. Similar waterside settlements can be found elsewhere in this region, like in the& most important place of the historical province Kordun, the town of Slunj, which boasts, besides the ruins of a medieval fortified city, the waterside village Rastoke, at the mouth of the rivers Slunjčica and Korana.

The autochthonous folk culture is preserved in the villages around the capital city of the Lika-Senj County, Gospić, as evidenced by examples of traditional rural architecture, some of it from older and some from recent times. Also preserved in Lika are some of the old crafts, such as the production of a traditional Croatian instrument, the tamburica.The Museum of Lika is located in Gospić, known for findings from the prehistoric period.

One of the world's greatest scientists, Nikola Tesla, was born in Smiljan, a village near Gospić. In his native home is a museum with a sculpture of Tesla in front of it. In the museum, set up in 2006 on the 150th anniversary of Nikola Tesla's birth, there are pictures from his life and displays of his famous inventions related to the power adapter, wireless power transmission and others.

In the second largest town of Lika, Otočac, in the Gacka Valley, there is also an interesting museum collection which shows the rich folk heritage of the region. Its most valuable exhibit is the famous helmet from the Bronze Age, which belonged to the original inhabitants of this region, the Illyrian tribe Japoden. At the other end of the Lika - Karlovac region, at the starting point of the old roads Jozefina, Lujzijana and Karolina, is the town of KARLOVAC, established in 1579 in order to protect from Turkish conquests. Then, in the plains, at the confluence of the Kupa and the Korana rivers, an ideal Renaissance city was built in the form of a six-pointed star surrounded by moats, which are still partially visible today . Apart from Karlovac, the military importance of its surrounding area is emphasised by numerous ancient ruins, towers and castles. Among the preserved forts and castles are Dubovac on the edge of Karlovac, Novigrad on the river Dobra, Ozalj on the canyon above the river Kupa and the castle Frankopan in Ogulin. The unique Ribnik is important as an example of "Wasserburg", a castle that is surrounded by water, and the fortress Sokolac in Brinje on the way to Lika has a preserved and restored Gothic-style chapel.

Given the fact that from Karlovac, important old roads lead towards the sea, there are also many old bridges that have been preserved, and these are monuments to road builders. The richness and refinement of the Karlovac region is witnessed through numerous exhibits in the Museum of Karlovac, and by one of the oldest hydropower plants in Europe, the popular "Munjara", located in Ozalj, near Karlovac.